Here is an essay by Karen Ball on Gary Shinfield’s  exhibition.

Of Site and Connection – reflections on a personal journey.

Gary Shinfield is known for large printed works on paper which inhabit a gallery space like wandering explorers, not lost, just contemplating the terrain. This artist records topographical, archaeological and fleeting human forms with a unique gestural mark but his overriding concern is connection to a site on a physical and spiritual level. He has traversed much of Australia and several overseas countries pursuing that goal. The artwork made from each of these expeditions intertwines to form an immersive visual diary.
In 2010 Gary Shinfield spent two weeks printmaking with Basil Hall in Skopelos, Greece. Intrinsically drawn to the local rock formations and remnant buildings, the term ‘enclosures’ was introduced by the artist to describe their physical and emotional presence – a trope that subsequently appeared and reappeared in the evolving language of the print series.

Unknown to him at the time, the printing matrices, together with flotsam and jetsam gathered from the Greek shoreline, would become something of a palimpsest when transported home to Australia. Shinfield then worked further into the original plates and made additional ones as part of an ongoing journey. Ensuing circumstances would take him and his treasured collection of creative ephemera to different sites and further connections in NSW. The etchings, woodblocks, prints and found objects which emerged from Greece were physically or emotionally carried with him to each location.

In late 2013, while sitting on the veranda of his brother’s home on the family property in Eungella, northern New South Wales Shinfield continued carving woodblocks. Below the veranda, the ever present sound of the Oxley River accompanied him as he worked and permeated his creative consciousness. Aware this period of time was finite, his mark-making nourished through immersion in the emotional and physical presence of family, Shinfield proceeded to record it without words. He soon became aware there were parallels with the familial, emotional enclosures of Eungella and his earlier interpretation of remnant, archeologically significant building foundations in Skopelos. He wondered, however, if his depiction of ‘enclosure’ co- existed with images drawn from nature or presented an ambiguity between harmony and separation. He questioned whether the structures he seemed compelled to represent were quiet places for contemplation or impervious cells from which escape was difficult. Paradoxically, through the artist’s compositional integration and layering of enclosure motifs with meandering water courses (a life force) security, renewal and protection are suggested to the viewer. The series titled River and Enclosure 1-16 represent the first ‘river site’ in the body of work made for the exhibition, Two Rivers.

The following year saw a change of personal circumstances, another site and another water course – a pool in Medlow Bath, the Blue Mountains, NSW where Shinfield relocated in early 2015. The pool is part of a beautiful, vast garden with numerous paths. Surrounded by natural bush tracks, this tranquil, pristine location offers abundant space, the opportunity for walking and contemplation. While the series, Maze, made by Shinfield in Medlow Bath, makes some reference to visual and natural phenomena of the location, it is overwhelmed by a sense of impending loss. The ‘pool’ becomes the ground on which complications of the maze are imprinted. This chapter of Shinfield’s work physically and psychologically traces a ritual, daily walk overshadowed by emerging circumstances. Where the earlier enclosures suggest the possibility of sanctuary and protection, the Maze series signifies loss and letting go. Pathways are presented as impenetrable obstacles to their maker.

Shinfield also made ink drawings at that time with dominant figurative elements and a number of lino blocks based on them. The drawings have an unintentional, visceral connection to the preceding chapters of his journey. Their spare, stark quality reveals much about love and loss. The final prints made in this series, titled Game and End Game, overtly reference the human condition and an ending where the outcome is already known. This small group of final powerful yet contemplative works in the series are a nadir – the point of letting go. Each gently touches time and location. Geographical landmarks are anthropomorphised to suggest phantom figures moving through and beyond the picture plane while the notion of journey connects each work to the other.

The use of semi-transparent, hand-made Chinese paper and ‘ghost prints’ for which Shinfield is known intensifies the ephemeral, fragile quality of the work and is analogous with the fleeting moment, impermanence and passages of life. His prints on Chinese paper, routinely exhibited in a free falling manner (without frames), identifies them not only as precious art objects but imbues each with the ability to move in the gentle current of air generated in the gallery space. That is, they are at one with the viewer.

The concept of ‘reverie,’ through which an individual is able to descend deeply within himself, savour solitude and reconnect with personal history, can be said to inform the work of this artist. Gary Shinfield navigates through a personal landscape of place and time but leaves the pathway open for us to follow. Two Rivers, not only evokes deeply remembered emotions for its maker, it finds a common thread called compassion, and holds it.

‘At the bottom of every reverie, we find that being which deepens everything, a permanent being’

Hopefully this will be easier to read, thank you to those who alerted me to the difficulty with the last post.

Artsite Gallery would like to invite you and your friends to join the Sydney Printmakers    for the Official Opening of this exhibition by Emeritus Professor Sasha Grishin AM, FAHA, on Sunday 6th March  at 3pm

Goat in a Boat, printmakers from Sydney Gallery School.

The third and second year students will be exhibiting etchings, collographs, lithographs and other relief and intaglio prints, responding to this fun and evocative theme, “Goat in a Boat”. It’s a great opportunity to see what is coming out of the art school scene and perhaps even pick up a fresh new work from local emerging artists. Entry is free

This may be the last time you get to see work from the Sydney Gallery School as the State Government is threatening to reduce funding to the Visual Arts in TAFE. Show your support of art education by coming along to the exhibition. 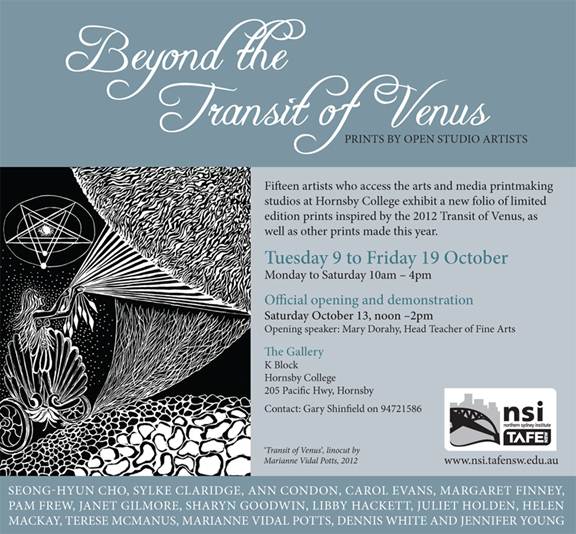 A group of 15 self- directed, artist/ printmakers make up the Open Studio in Printmaking at Hornsby College, Northern Sydney Institute of TAFE.  This particular course conducted in purpose built facilities has been funded by student fees, and is planning to run again in 2013. Please contact Gary Shinfield for more information by email at Gary.Shinfield@tafensw.edu.au or leave a message on 94721586.

The artists will be exhibiting a new folio of limited edition prints, inspired by the 2012 Transit of Venus, as well as other prints made this year. These include linocuts, lithographs, etchings, woodcuts and screen prints.

The opening has been timed to coincide with the Hornsby Arts Festival, on Saturday 13th October in The Gallery, K Block, 205 Pacific Highway, Hornsby between 12 and 2pm.

Since the early sixties , Ruth has devoted her energy and time as a mentor to encourage, educate and critique. Her popular lectures bring to her students an awareness of the importance of the formal principles of art , but she also fostered the use of the creative imagination rather than just realistic imitation.

Ruth has always led by example, beginning her long and varied art career in the 1930’s , working as a junior commercial artist in a Sydney printing firm. She married in 1946 and between domestic responsibilities and child rearing began studying painting in the studio of recently immigrated Hungarian artist Desiderius Orban , then later at the National Art School , and in 1970’s she enrolled in a Fine Arts History course at the University of Sydney , writing an arts review column for 10 years in the Australian Jewish Times.
But already in 1963 her artistic practice had taken a new and important path when she became a foundation student in the Lithography printmaking class established by Joy Ewart at the Workshop Arts Centre in Willoughby . She also joined as a founding member of the newly launched Sydney Printmakers group and the Melbourne based Print Council of Australia, acting as their NSW representative.
In 1967 Ruth was awarded a scholarship to the Pratt Centre for Contemporary Printmaking in New York and over subsequent years expanded her reputation in international exhibitions and Artist in Residence Workshops.
In 1984, with a small group of other papermaking enthusiasts, she established Primrose Park Paperworks as a centre for the age-old craft of hand papermaking, the first open-access teaching workshop of its kind in Sydney.
Ruth’s cast paper works are unique in Australia.
However in 2004, in her advancing years when she found the physical strain of creating them too physically demanding she began experimenting with computer graphics, and since then has been successfully exhibiting her Archival Inkjet prints.
With more than 40 solo exhibitions to her credit , Ruth’s works are held in international art museums and in many Australian national, state and regional galleries, and corporate and private collections.